On Monday, January 21st, Cecilia woke up very lethargic and had some tightness in her chest (to Eric it sounded like RSV all over again). We dropped Maeve off at school and Eric brought her to the doctor.

The doctor immediately advised we administer a nebulizer treatment to try and clear her chest and allow her to breath easier (she's been on asthma meds for 15 months as she was deemed a candidate for asthma).  While it worked, the results were temporary.  We proceeded with another round of nebulizer treatment, although less medicine than the prior version.  Same effect - temporary results vs long lasting.

Due to the continued lethargic state and not obtaining permanent relief from the nebulizer treatments, the doctor advised we hook her up to O2 and phone the paramedics.

The ambulance arrived to the office and we took her out of the doctor's office on a stretcher.  Prior to heading to the hospital we attempted to stabilize her in the parking lot of the doctor office. The paramedic team also tested her blood sugar levels where it was determined they were very low!  They provided a glucose boost to make her more alert and also administered a 3rd nebulizer treatment.  Unable to get the responses they were desiring, they recommended we go lights and sirens to the hospital.  On the way to the hospital she finally started displaying the signs they were hoping to see prior to leaving the doctors office.  This was very reassuring for Eric who was in the back of the ambulance with her!!  Upon arriving into the ER department, they had a team fully assembled to address her conditions.   However, after taking 1 look at her they advised she was looking much better than they originally anticipated, and suggested we visit a regular ER room as opposed to the true emergency area.  Huge reassurance for Dad!

In the ER they performed various tests including a chest Xray where they determined she had a trace of pneumonia on 1 side. Due to the events of the morning, we were admitted to the hospital for the where they could continue to monitor her progress, oxygen level, blood sugar levels and everything else.  They were unclear about how long we would be in the hospital, but they said she needed to continue showing signs of progress and not needing extra oxygen.  As it turns out, we were only there for 24 hours.

She was a trooper - not even flinching for the IV and all the poking to test blood sugar levels. She slept most of the day and night.
Mom, Laura, Grandma Jan and Grandpa Steve visited in the hospital, while Eric stayed with her overnight to be by her side. 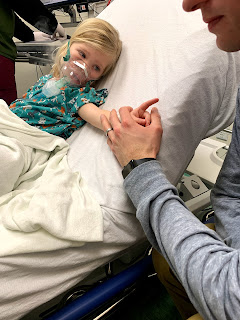 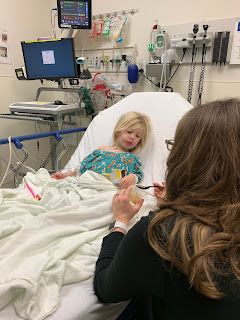 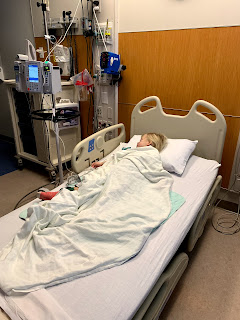 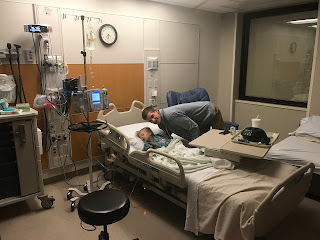 And then we had the best homecoming with King Cakes arriving earlier that day. We enjoyed those and are glad to have Cecilia home! 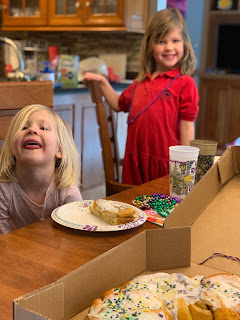 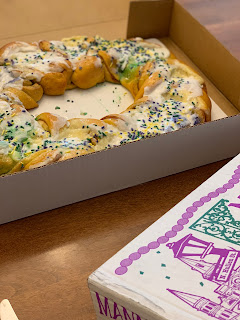 Her class made her a 'get well soon' card that she loves! 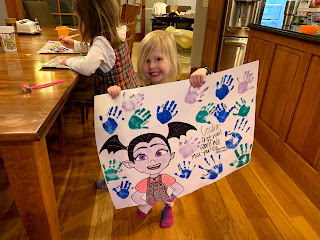 Luckily Aunt Anne, Grandma Brigid and Grandpa Ed were in town to help out this week with Kyle as Cecilia was home all week from school just to try and give her body a chance to recover. For now it looks like she'll be back to school next week!  Now we just need to work on keeping the rest of the house (and newborn Kyle) healthy!  What a week and thanks for all of the prayers!