Cecilia is 9 months old today. We have the day off because of the New Year so we went to lunch with Grandpa Steve and Grandma Jan and played around the house. She is into all of her sister's toys. She is trying hard to pull up on the furniture and is crawling everywhere. She's such a happy baby and eating lots of new foods - meat, eggs, oatmeal (doesn't seem to like this) and goldfish. She's such a good eater that she doesn't want much to do with her bottles these days. She is NOT sleeping through the night yet so we're trying a few new things that Aunt Marcia suggested like going to bed earlier or keeping track of the time she wakes up to make sure she isn't having night terrors. We're also trying to give her a lovie during nap time to see if she likes that. Hopefully something works soon. We'd love a full night of sleep :)

This blanket was Eric's blanket when he was a baby. It was made by his Aunt Janet (Steve's sister) who passed away a few years ago. It's a beautiful blanket! 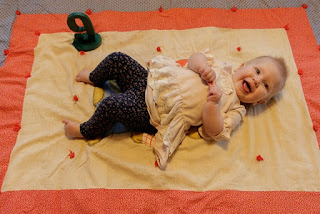